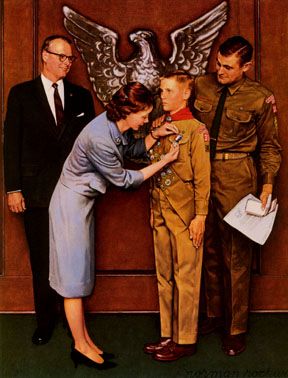 Also affectionately known as Bobby, RTM, and Thatch, he was born in Hartford, CT on November 28, 1949, to Richard and Patricia (Dimock) Martin.  Bob grew up in Stockbridge, Massachusetts, and graduated from the former Lenox School in 1967.  Norman Rockwell lived and painted in Stockbridge during that time, and often used local folks as models. The 1965 Boy’s Life cover, A Great Moment, pictures fifteen-year-old Bob Martin and his parents, Pat and Dick Martin, as he receives his Eagle Scout award.  The painting captures the hopes, honesty, and stoicism of the era Bob was born into, and which he personified.

Bob graduated from Boston University in 1971 with a B.S. in Political Science. Following college, he worked for many years in the wholesale lumber industry.  He often told stories of perusing telephone books in phone booths in order to set his route of appointments, long before cell phones, the internet and GPS. In 1982, on a bet and a dare, Bob accepted a position to work in Saudi Arabia. The stint lasted for five years, and during that time, he took every opportunity to travel and experience other countries throughout Europe and the Far East.  He skied in Switzerland and France, and vacations included the Philippines, Thailand, Australia, and New Zealand. Bob’s enthusiasm for adventure, together with a relentless work ethic, formed a personality people admired and emulated: the best of men.

Bob met his wife Mary 53 years ago on Memorial Day weekend. She was his great love in college. Separate for years after college, Mary “went looking” for Bob nearly two decades later.  They were married, with a house, a dog, and a baby, in very short order.  Settling in East Haddam, CT, they began their new life together hosting old friends and building new relationships with neighbors that continue to this day.

Bob was born of a family impassioned for the outdoors. His father instilled his enjoyment for skiing as a sport, but more importantly, as a group event.  Ski trips automatically included family and friends, a tradition Bob passed on to the next generation with the same joy and all-on-board spirit.  He was an avid golfer, frequently travelling stateside and internationally to golf with friends. When on the road, a course near-by would be cause for him to reorganize his day, as his clubs were most always shipped alongside marketing material for a game between tradeshow hours.  To know Bob was to also appreciate that he was just as happy tending his own back yard.  That was his nature.

Bob and Mary, in partnership with Ed Ritz, were the founders of InCord, which continues to grow and thrive 26 years later.  The company supports hundreds of employees and their families.  As the definition of a “road salesman”, Bob taught many others how to build business relationships, and through persistence and integrity, maintain them for decades. The commitment by ownership to provide a healthy workplace, with excellent benefits, and dedication to the worker’s needs before the work, has won InCord Top Work Place awards for years running. During its creation, high value was placed on creating a safe harbor with light, music, and acceptance.  Internships were provided to local high school students providing credits for life skills gained in the workplace. At all times, Bob encouraged each employee to continue to grow and succeed within, or beyond, InCord.  The “No Whining” sign posted over his door was actually a welcome sign for problem solving.  His succinct philosophy: we can help, so we should. Every decision was compassionate and thoughtful.  Bob’s path in this venture defines everything decent and good, and a pinnacle achievement in a lifetime paying it forward.

Bob was a husband, a father, a brother, a friend, and an uncle; a treasure. A man dedicated to his family, his friends, and his community.  Bob was exceptionally proud of his son, Casey, and the life he has manifested. He leaves behind many hearts heavy with sadness who will miss his magnetic smile, those sparkling blue eyes, the camaraderie of cracking a beer, and his love of the outdoors.

We love and miss you, Bob.

Care of arrangements have been entrusted to Aurora-McCarthy Funeral Home of Colchester. Bob’s family would like to express a heartfelt thank you to the LiveWell family for their compassionate care and for loving him. For those who have asked, memorial donations can be made in Bob’s name to the “iCare Employee Fund” at LiveWell, 1261 South Main Street, Plantsville, CT 06479. His family is planning a celebration of Bob’s life at Smith Farm Gardens in East Haddam on Sunday September 26, 2021. For on-line condolences, please visit www.auroramccarthyfuneralhome.com